Give Every State Park A Second Chance I’ve found that my first impression of anything – a movie, an album or even a state park – is tinted by my mood.

I will not like something if I’m in a bad mood. When it comes to parks, my internal ranking system has been affected by my parks visits in 2021. That year, I ran a mile in all 121 state parks over the course of 224 days.

Whatever I felt then – which I documented in a spreadsheet – is how I feel about the parks now. On a good day, I could rank a park 8 out of 10. But that same park on a bad day, could be ranked a 5 out of 10 – putting it on the list of places I won’t visit again.

Which is really dumb. If I was on my fifth run of the day and I was hungry and tired and just wanted to relax, I’m not going to like that park. It’s a bias that is not based in fact.

Which brings me to Salt Springs State Park in Susquehanna County.

I had visited Salt Springs in late June 2021 after spending a night in Eagles Mere with friends. I had four park runs on the agenda before driving back home to Enola. Salt Springs was my third park of the day. Since I had set my one-mile run through a prairie, I was already in a bad mood. You see, running on grass trails suck. They get your shoes wet, which in turn gets your feet wet which can lead to blisters. Not great. I was not kind to this park in my notes. It was hot and I was tired. I wrote the park off, damning it to a list of state parks I never need to see again.

Luckily, I got an opportunity to redeem myself. My wife Abby and I were attending a wedding in the Scranton-area when we had several hours to kill before the ceremony. As I tend to do, I looked for the nearest state park – which so happened to be Salt Springs.

Since I couldn’t access my spreadsheet due to a lack of signal, I didn’t know where I had ranked the park. And when you visit so many parks so quickly, they tend to blend together. I remembered bits and pieces. Prairie trail. Wet shoes. That’s about it.

We weren’t in the park but a few minutes before I knew this trip was going to be much different. We were immediately greeted by volunteers from the Friends of Salt Springs Park. They told us about some of the park’s notable features and suggested what to do during our short time there. The 405-acre park has so much to offer, which I had completely missed on my first visit. That was common. During my so-called “121 In 21 Challenge,” I had a simple mission. Run one mile at every park in 2021. With upwards of a dozen park runs scheduled for a weekend, I didn’t have time to sightsee.

As a result, my park visits were limited to 12-minute miles and that was it. No waterfalls. No hikes. No stress-free bike rides. So though I had been to every park, I didn’t have fun experiences at all of them because of the rules I set myself.

However, as I revisit more parks, I’ve found just how much parks I had written off had to offer.

After speaking with the volunteers, Abby and I decided to take the short Gorge Trail via the Gorge Spur Trail. The spur allowed my recently worked-on knee to hike without the steep incline and decline.

The trail was beautiful. Tall ferns lined the ground around the trail – which was covered by 300-year-old hemlocks. The well-marked trail provided us with great opportunities for photos of the three waterfalls at the bottom of the trail. On hotter days, I could imagine hikers dipping their feet in the cool water before heading back on the trail. Even on a weekend, the trail had few visitors. That gave us time to explore our surroundings without screaming children or yapping dogs. I tend to value nature much more when there’s less people around. It’s hard to appreciate something beautiful when someone is blasting music or kids are running around.

On our walk back, we were given a tour of the renovated Wheaton family homestead and 19th Century garden by a cheerful volunteer. As we were leaving, the volunteer asked if we were going to visit the salt spring – which is what the park was named after.

“No,” we said. “Well, you just gotta,” the volunteer said before directing us to the trail that would bring us there. We’re glad she did. A short walk away, we found the salt spring. The first people to extract salt from the spring water were American Indians who traveled through the area during hunting expeditions, according to the DCNR website. They attempted to keep the location of the spring secret from the settlers, but eventually and with a large enough sum of money, it was revealed.

To be honest, we would have completely missed the spring if we didn’t get helpful suggestions from the volunteers. They were so eager to provide historical information on anything related to the park.

Every time we were heading back to the car, we found more things to explore. “Let’s check out the garden.” “Oh, let’s see what camping is available.” What was supposed to be an hour trip quickly turned into three hours.

Around every corner was a hidden gem. And that’s the message. Don’t write off a state park or forest before you invest some time there. Our public lands offer so much, that it would be a shame to disregard a park over a single bad time or because of your mood. I should know. 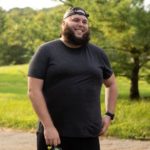 Christian Alexandersen ran one mile in each of Pennsylvania’s 121 state parks in 2021 and has been sharing with us stories and tips from his journey!  To read more blog posts from Christian and other PPFF guest bloggers, visit our News page.

Give Every State Park A Second Chance