In 2011, the Audubon Society paired with the Kittatinny Ridge Conservation Landscape to aid counties along the Kittatinny Ridge (Berks, Carbon, Cumberland, Dauphin, Franklin, Lebanon, Lehigh Valley, and Perry) in completing Return on Environment (ROE) reports. The goal of the ROE reports is to estimate the monetary value that protected open space contributes to the local and state economies. Since 2011, other counties in sensitive environmental regions such as the Delaware Valley and Laurel Highlands have completed similar studies in order to illustrate the important and often unseen economic value that protected open space has in these counties and in Pennsylvania as a whole. Return on Environment reports are a way of assigning estimated monetary value to the services that protected open space provides for a county or region. This evaluation is based on four major criteria: the value associated with natural ecosystem services that open space provides such as storm water management and reduction in air pollution, the monetary value associated with direct and indirect spending on outdoor recreation, savings from avoided healthcare costs attributed to access to recreation and clean environments, and the increased property values that come from living close to open land and/or water.

Through complex analysis, an estimated monetary value is determined for each category based on quality, quantity, and type of protected open space in each county. And while this is only an estimation, ROE offers a more tangible visualization of the impact that open space brings to these counties.

So, how much is open space worth?

According to the Return on Environment reports, protected open space provides significant monetary value for each criterion in almost every county. The reported estimated annual value of open space for each county is at least $550 million with some counties like Cumberland and Franklin reporting that open space provides more than $1 billion in annual value. The estimated cost savings from natural ecosystem services provided by open space adds up to nearly $5 billion along the Kittatinny Ridge, and the total estimated direct and indirect economic contribution of outdoor recreation within these protected spaces exceeds $2.2 billion. In addition to its economic value, protected open space provides over 30,000 jobs and more than $140 million in annual state and local taxes in just these 8 counties. 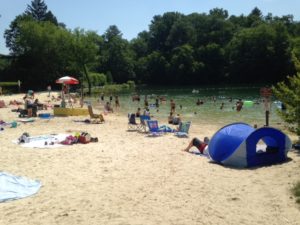 The Laurel Highlands region completed a similar report in 2019 that focuses on the value of clean water for the 6000 miles of streams and waterways that flow through the area. It is reported that its freshwater systems provide an estimated $3.7 billion in total ecosystem services annually, employ over 14,800 people, and add upwards of $765 million to overall property values. As is evidenced by these reports, protected open space not only provides a place for recreation and ecosystem conservation, but these spaces also contribute heavily to the local and state economy and to community health as well. By increasing the amount of protected space within Pennsylvania, we will be investing in both environmental and economic sustainability for generations to come.

For more information about the Return on Environment reports, visit: https://kittatinnyridge.org/explore/roe/

To learn more about the challenges to our state parks and forests forced by long-term funding shortfalls, visit protectourparksandforests.org Jason Lenker is a senior sustainability major at Shippensburg University. During his internship at PPFF, Jason has been doing research on the economic impact that protected open space and recreation has in Pennsylvania, as well as research on ways to make the state parks and forests more accessible and equitable for all demographics.